Enemies in GTFO are mostly found in a dormant state, thus referred to as sleepers.

Although some of the enemies are not dormant, they are still colloquially referred to as "sleepers" by the characters.

They are sometimes called monsters and creeps by the prisoners.

They can be detected by using the Bio Tracker, or by the crackling sounds the humanoid sleepers occasionally make along with the glow that emits from their body.

These enemies are found in nearly every expedition

These enemies are exclusive to specific expeditions

These enemies do not move from their spawning locations

Sleepers in their humanoid form are mutated humans of pale skin and mangled body parts found in every corner of the Complex in varying numbers. They emit distinctive sounds while dormant (these sounds being different depending on the variant), making it relatively easy to locate their whereabouts. Should they be approached by a player, they will begin to glow, indicating heightened awareness of their surroundings. After being initially disturbed, there is a second phase where the sleeper's body will begin to flash rapidly and spasm about, which will calm down after a few seconds once the disturbance has stopped. However further continuous disruption (let it be in the form of sound, light, or movement) in this second stage will cause them to awake and attack the source of the disturbance - the player. They will then let out a screeching call a few second after it, which in turn will alert any sleepers in the same room as it. It is possible to prevent a sleeper from alerting others by killing it or staggering it with a shove. While weak individually, a large group can easily overwhelm the team by sheer numbers. The sleepers have the power to breach doors. Sleepers have usually a lighter skin tone, however, occasionally, a darker-skinned can spawn, specifically in Hordes, which also can be found in the dormant state rarely.

On rare occasions, large-sized sleepers (Big Strikers, Big Shooters or other variants found deep within the complex) are encountered. It is possible to take out these big variants with four fully charged melee hits by Sledgehammers. Other combinations of melee weapons might require the players to land more than four hits. If you intend to stay in stealth while killing a big sleeper, the team must synchronize all hits or keep the enemies staggered by delaying hits and breaking body parts (the Bat and the Sledgehammer have a high amounts of stagger damage with fully charged hits and will stagger all non-boss enemies). Using c-foam is normally not necessary as the first hits should stagger the giants, preventing them from attacking and screeching. It should be noted that the removal of the head or the upper body does not guarantee a takedown.

The inside of the body of sleepers is filled with lots of yellow, oval-shaped objects, resembling eggs.

These actions will alert a sleeper instantly.

Most sleepers can be neutralized silently by using a charged melee strike to the head. However, despite being silent, killing a sleeper can wake up the other sleepers under certain conditions.

(Note: The knife's "low noise" feature reduces the chance for an enemy to wake up from the long range aggro.)

The sleepers have weak points that can be used by the players to GREATLY lower the waste of ammunition and time to kill them. Weak points must be used in order to one-shot most of the sleepers with the melee weapon or to kill big sleepers in fewer hits.

A general rule is the sleepers are more vulnerable to attacks made against their head and back. Some sleepers variants seem to be more vulnerable on the head than the back and vice versa.
Expand for Spoilers => Stronger enemies variants can be protected from damages for certain parts of their body, one example is the Charger variant, as their horns or spikes growing in their head protect them from fatal head damage, leaving only the back vulnerable.

The sleeper's occiput is usually the most vulnerable weakpoint of their body, as it takes both head and back vulnerabilities at the same time. Aiming for the occiput can allow the players to one-shot a Striker with the DMR, one-shot a Shooter with the Pistol, or one-shot a Scout with the Bat, Knife or Revolver. 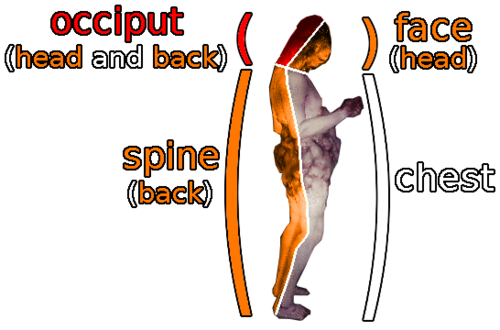 CAUTION: Contrary to what the image suggests, the back is based on the player + enemy's orientation, NOT on where the enemy is hit. For example, if the player is standing in front of a bent enemy and hit it on its back, it will NOT count as a back hit.